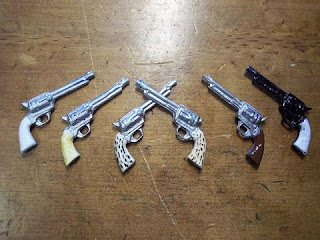 Six Tips For Nervous Investors
I saw this title on a Yahoo main page, and thought it would be funny. So I clicked on the link, which took me to a Ben Stein piece titled "Keeping Your Cool in a Shaky Market." I'll write down his six tips and translate them.

1. "Don't Panic"
Wrong. Fear is a gift. Rather than remain calm and watch your equities become worthless, you should panic appropriately, and panic early. What do you call the last sheep to run? "Wolf-nugget." When the wolves are gone, you go back to the pasture, and there's more grass left for you. With all the money you save by divesting early, buy some versatile, reliable assault weapons, plenty of ammo, and some body armor. Because come The Crash, when starving, violent gangs will roam the streets, some of them are bound to notice your relative prosperity and you'll need to fight them off.

2. "Keep plenty of cash on hand at all times"
Unless he's talking about Euros, this is poor advice. Even then. Cash is made of cotton and paper. It has an extremely poor track record for maintaining value. When the Fed-bots are printing up cash like they intend to denude the cotton fields and forests of North America, you can expect inflation. Lots of it. If, unlike the government, you are a human being who must count property, food, energy, health care and entertainment costs in Your Personal Inflation Index (YPII), you may have noticed that real inflation has been regularly clocking in at 15% per year. So instead of lots of cash, it's better to have plenty of valuable contraband lying around. I would recommend a few hundred cartons of cigarettes, and if you have a back yard, you might bury a 5,000 gallon tank and fill it with oil. That stuff isn't getting any cheaper.

3. "Stocks don't always fall for a good reason"
Wow. I never realized until now that Ben Stein's famous monotone was the result of a lobotomy. This man really is as moronic as he sounds, and the absolute reverse is true. Stocks don't always rise for a good reason, because people have to put money somewhere, and they've been told stocks are perfectly safe investments. Every stock market crash happens for a damned good reason. They happen when things have gotten so bad and the abuses so systematic that the fixers figure they can't get away with it any longer, and pull out their money.

4. "Put not your trust in princes"
Huh? In this section, Mr. Stein divulges that although Alan Greenspan gave the eulogy at Papa Stein's funeral, he is not God, and we shouldn't listen to him as if he knows anything about what's going to happen. So...if the (barely former) Chairman of the Federal Reserve, erstwhile prince, and the greatest counterfeitor of all time doesn't know there's trouble coming, I guess no one does. Whatever you do, don't put your trust in the man who torpedoed the dot-com fueled stock market boom with two words: "irrational exuberance." What Ben does urge us to do is trust the super-rich: "The little guys sell out at the first sign of trouble. The ones with the private jets hang on." Yeah. As you recall, all the rich people chose to go down with the Titanic, kindly giving their life-boat seats up to the lice-ridden children down in steerage. And at the end of the movie, stiff like a popsicle, Leo DiCaprio froze.

5. "Diversify"
Finally, some good advice, except for the part where he advises, "Yes, it'll be a rocky road in China and Brazil, but over long periods you'll do great." Right. Got twenty spare years? The Shanghai stock index lost over 8% in a single day last week. But Ben's right about diversification. In addition to a few hundred cartons of cigarettes, maybe two AK-47s for every family member, 5,000 gallons of oil, and fifty grand or so worth of gold, you'll want to broaden your portfolio beyond stocks and bonds, you know, into other things of rock-solid value. I would recommend relieving the back room of an Apple store of its entire inventory of iPods, as these are very good for cash or trade. Also, you might try hi-jacking a truck full of printer cartridges. They're small, ungodly expensive, and everyone runs out of them a lot sooner than they think.

6. "The long-term direction of the market is up"
Question: what are most stocks measured in? Dollars, last I knew. Next question: is a share of Ford Motor Company and all the other companies which formed the Dow in 1923 worth more now than it was then? I have no idea, and neither, with any precision, does anybody else. Though it's safe to say Ford is worth a lot less for any investors who held it for 84 years. As for inflation, here's one instructive example from a period Ben Stein probably perceives enjoyed stabe prices: in 1941 a pair of Florsheim shoes cost $2. In 1951, an identical pair of Florsheim shoes cost $25. So is the long-term direction of the market up in real terms? Well, the dollar has been going down longer than my sweet bippy, so while you can make an iffy "yes" case, you have to take a hundred years of very questionable inflation data into account. Which means you can make a pretty credible "no" case.

I have two rules for investing. Find good companies and buy them.