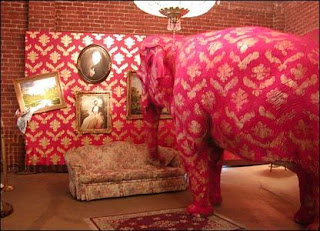 Someone Else Sees What I'm Seeing
Julian Robertson sees the pink elephant, and publicly called out the 2008 fiasco. Now he can't figure out how the US and several other countries will avoid triggering hyperinflation with the amount of money they're printing (I can't either). He's noticed that no one is buying long bonds (who would?) and buyers for short ones have dwindled to a few usual suspects. This guy, pun intended, bears watching. He has placed big bets on shorting treasuries and appeared on CNBC to help talk them down:

The US is too dependent on Japan and China buying up the country's debt and could face severe economic problems if that stops, Tiger Management founder and chairman Julian Robertson told CNBC.

"It's almost Armageddon if the Japanese and Chinese don't buy our debt,” Robertson said in an interview. "I don't know where we could get the money. I think we've let ourselves get in a terrible situation and I think we ought to try and get out of it."

Robertson said inflation is a big risk if foreign countries were to stop buying bonds.

“If the Chinese and Japanese stop buying our bonds, we could easily see [inflation] go to 15 to 20 percent,” he said. “It's not a question of the economy. It's a question of who will lend us the money if they don't. Imagine us getting ourselves in a situation where we're totally dependent on those two countries. It's crazy.”

Robertson said while he doesn’t think the Chinese will stop buying US bonds, the Japanese may eventually be forced to sell some of their long-term bonds.

“That's much worse than not buying,” he said. “The other thing is, they're buying almost exclusively short-term debt. And that's what we are offering, because we can't sell the long-term debt. And you know, the history has been that people who borrow short term really get burned.”

A clever person concerned about hyperinflation and wanting to make a financial killing would use exchange-traded funds to go long on 2-year Treasuries and short on 10-year Treasuries, which is probably something like what Julian Robertson is doing.
Posted by MarcLord at 4:13 PM

This would explain why the Bush Admin stopped selling 30 year bonds. They wanted to minimize the number of canaries in the coal mine.

I just watched the video again. The only thing missing is for some chinese bureaucrat to say "Checkmate!"

Fortunately, the Japanese and Chinese understand that it's in their best interests to keep the global Ponzi scheme going. This will cause them to, I think, slowly cut back on US lending, to provide a soft landing.

If the US reduces borrowing to match, the system will continue. Inflation will go up, but not to the hyper-inflation levels that would occur if the Japanese and Chinese cut the spigot abruptly.

The number one way to reduce borrowing is to reduce the rate of growth in health care. If the Democrats can grow a backbone and stop letting the minority dictate the terms of healthcare reform, we have a chance. But I'm not betting on it.

to mix metaphors, it's kinda like the canaries can upset the chessboard.

"If the Democrats can grow a backbone..."

If an epileptic seizure of optimism strikes me, yes, I can see this. Certainly there's a mutual hostage situation going on with China and the US and the borrowing. But saying that this is the good thing isn't exactly spreading the big warm fuzzy blanky over me.