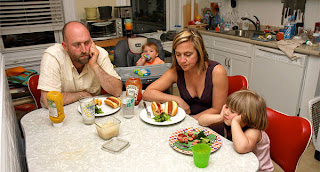 Nation Ready To Be Lied To About Economy Again

WASHINGTON—After nearly four months of frank, honest, and open dialogue about the failing economy, a weary U.S. populace announced this week that it is once again ready to be lied to about the current state of the financial system.

Tired of hearing the grim truth about their economic future, Americans demanded that the bald-faced lies resume immediately, particularly whenever politicians feel the need to divulge another terrifying problem with Wall Street, the housing market, or any one of a hundred other ticking time bombs everyone was better off not knowing about.

In addition, citizens are requesting that the phrase, "It will only get worse before it gets better," be permanently replaced with, "Things are going great. Enjoy yourselves."

"I thought I wanted a new era of transparency and accountability, but honestly, I just can't handle it," Ohio resident Nathan Pletcher said. "All I ever hear about now is how my retirement has been pushed back 15 years and how I won't be able to afford my daughter's tuition when she grows up."

"From now on, just tell me the bullshit I want to hear," Pletcher added. "Tell me my savings are okay, everybody has a job, and we're No. 1 again. Please, just lie to my face."

I love the Onion. They don't really mean to, but they usually manage to put things into perspective quite nicely.

The irony is that this is not satirical. Yes, they made up the quotes, but after a few trillion spent on "fixes", we are almost as poor as the russian pensioners after Glasnost.

Good news, however: Kraft's profits were way up, buoyed primarily by the sales of macaroni and cheese (true fact).

I don't accept the premiss of "frank, honest, and open dialogue about the failing economy" that has gone on. Every news source and opinion follows its own agenda, and from where I stand, the news providers have been telling more than the people need or want to hear; just as the financial crisis has been caused by those who want to sell more than people need or want to buy. Nothing new there, of course. The whole system of free enterprise is based on force-feeding (all right, powerfully persuading) the domesticated animals (all right, the public) to consume the chicken-feed.

I'm sad if they think they want to be told lies. It must be because it has never occurred to them they don't have to listen in the first place.

What I see with my own eyes is my reality. The news doesn't resemble it ... oh all right, sometimes the weather forecast turns out correct.

For myself I listen to the BBC Radio 4 a lot, mostly to sneer and argue with it, noticing how it tries to define its listeners' reality, defying my accurate memories and certain knowledge with its propaganda.

Over here, I sense that no one wants to hear about swine flu any more. The desire of the farmers to tell is greater than the desire of us poor swine to be told. So they have shut up about it for a while.

I confess that what I like to hear about is anything which heralds the imminent self-destruction of our poor Prime Minister Gordon Brown and his hapless government. That bad news strikes me as good news.

When I said "farmers" above I was being allegorical as in Orwell's Animal Farm.