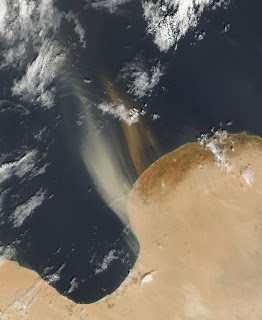 We're off on the road to Morocco
This camel is tough on the spine
Where they're going, why we're going, how can we be sure?
I'll lay you 8 to 5 we'll meet Dorothy Lamour

Living under a rock and listening to swing music isn't a bad way to go. Get yourself some root beer, a tall glass and vanilla ice cream, drop in a couple scoops and let it fizz. Put on some WWII-era classics like Billy Strayhorn's "Take the 'A' Train" or Jimmy McHugh's "Comin' in on a Wing and a Prayer." Garand-damn-teed, you'll start feeling bright-eyed and bushy-tailed in no time. It's way more scientific than scientology, more meditative than meditation, and takes even less effort than Methodism. But sometimes a rock just isn't thick enough, or worse, is equipped with a wireless network.

Empires do not sensibly retreat or reduce expenditures, but follow a repeating, well-established pattern of symptoms:

"One symptom is widespread public concern over cultural and economic decay, with its many corollaries. The second is a growing religious fervor, church-state relationship, or crusading insistence. Next comes a rising commitment to faith as opposed to reason and a corollary downplaying of science. Fourth, we often find a considerable popular anticipation of a millenial time frame: an epochal battle, emergence of an antichrist, or belief in an imminent second coming or Armageddon. Last, these empires are prone to a hubris-driven national strategic and military overreach, often pursuing abstract international missions that the nation can no longer afford, economically or politically."


The West's inflatable, indispensable clown punching bag, Moammar Qaddafi, has fled from Libya. The largest tribes there, ones sitting on petroleum reserves which make their dust storm farm one of the world's 10 largest oil exporters, called for his departure. Said tribal chieftains also threatened to cut off oil exports to whoever was responsible machine-gunning protestors, by which they mean said West. From there it has devolved to civil war, and oil and gas exports from Libya have stopped. Germany, Italy, and China are sending warships. Add this to the 20 or so other South Vietnam-type US-funded regimes that are coming down, and I'm frantically searching the living room for back issues of People magazine. I'm hoping to find one from no later than 1996.

Regimes in Tunisia, Algiers, Morocco, Egypt, Yemen, Somalia, Iraq, and Iran are either toppled or teetered by waves of revolt ignited by skyrocketing food prices and no prospects. Bahrain, home of the US 5th Fleet, also looks like it's toast, and I've probably forgotten a few others like Oman. Food protests are now spreading across India and China. (Note: The Federal Reserve Bank is a primary cause of the rampant commodities inflation after a massive and continuing policy of money supply creation. The conversion of this money supply to things of actual value is known as Gresham's Law.) Saudi Arabia's sclerotic sheikhs won't last the summer, and the bin Laden family, the country's largest employer, is poised to serve as kingmaker.
In other news, Obama's State Department seems bumblingly oblivious, and it even continues to insist a CIA assassin caught red-handed in Pakistan should enjoy diplomatic immunity, effectively ending a crucial alliance over one thug's incarceration. Obama's minions appear to be consuming far more powerful anti-depressants than root beer floats, and they grasp neither the simplest repeats in pattern of outcomes, nor the enormity of their scale. This President has instead chosen to frame the collapse of dictators hand-picked by the US, skillful enforcers who have provided decades of brutal stability and oil exports, as healthy "democratic reform." This must be a lot like watching a man being torn to death by pit bulls and hearing him repeat, "I really love dogs! I really love dogs!" Yes, maybe the earth is just going through one big fit of democracy right now. Maybe the new Mid-East governments will only put up a few Twitter feeds and Facebook group pages while we continue to pump out all their remaining oil.
As Vincent commented on the earlier Oil Curtain piece, the Muslim Brotherhood seems well positioned to take over in Egypt and elsewhere. The structures of the current host nations for these mutinies simply don't favor near-term reform by any democratic process, and the global economic system is now rapidly destabilizing. Whereas the Koran was conceived as a road map for social justice, stability, equity, and charity, the precise improvements desired by the protestors. What is more likely to win: parliamentary democracy, or shared authoritarian tradition? While the Muslim Brotherhood isn't driving the bus yet, they and the chimerical "al Qaeda" can position themselves near the steering wheel and ready themselves to provide governing bodies with practical reach, or what I call waste management services. Whoever can keep the streets clear of garbage in these countries will end up running them, and the mosques are already organized by neighborhood. At minimum, religious thought leaders will have powerful seats at the bargaining tables, ones not well disposed to US, UK, or NATO interests as currently configured.

Whatever political spots you choose to sport, I think we can agree that Domino Theory, when applied to the cradle of crude, sounds expensive. My spots are known, and if a tree falls in the forest and no one's there to hear it, I may ask, "What did the state of Israel have against that tree?" But the problems in these forests and deserts are far bigger than Israel, and even I can't pin 2010's 70+% increase in the price of wheat on one hyper-paranoid enterprise in deviousness. In fact, purely from a stress level perspective, it's a great time to not be an Israeli. (When asked a couple weeks ago what effect the revolts in Tunisia, Algeria and Egypt are having on the collective psyche of America's land-based aircraft carrier in the Mid-East, Hassaf, the considerate former citizen of Jerusalem replied immediately, "Hysterical fear.") The UK, and later the US, went to extraordinary pains to arrange Israel and the Mid-East just the way it was circa November 2010. That arrangement is gone.

Sucking vanilla ice cream and root beer up a straw to the tunes of Glenn Miller means you choose not to experience hysterical fear. But it doesn't stop you from pondering the effects of your fellow citizens paying $5 per gallon gasoline this year. That roughly equates to oil at $150/bbl. Every 1 penny increase in the price of gasoline means 1 billion consumer dollars is removed from the US economy. $5 gasoline means a gross domestic product reduced in the neighborhood of 10-15%. At the micro level, many people already have to make choices between getting to work or eating well, or between eating and freezing. At the macro level, $5 gasoline is the sword of hyperinflation and the shield of demand destruction beating each other to smithereens. $5 gasoline may not even be possible, as $125 per barrel oil might take out the whole global economy before that happens. Like it did in 2008. One way or the other, oil is going to be a lot harder to get out of the Mid-East, and I'm frantically searching my living room for copies of People Magazine, hoping to find some from no later than 1996.
Empires don't reduce and they don't retreat borne on reason's wings. Empires collapse. Don Quixote was written by Cervantes many years after the effective fall of the Spanish Empire, one that was based on the most bloodthirsty forms of gold extraction, silver collection, and which was increasingly subject to the dictates of a religion completely disconnected from all semblance of sensible statecraft. In other words, it was just like this one. But at least the Alzheimer's-riddled old Don had some windmills to tilt at. The United States now devotes 54% of its annual budget to paying for current and previous wars. Offer this empire solutions, offer it alternatives, and it declines. It doesn't believe in windmills, it thinks they're only for wooden clog-wearing wusses. It doesn't want solar panels, rather the internal revenue service gives businesses tax breaks for using oil and gas. The empire's government is going to shut down this next month, its credit rating should have been cut in 2008, and public workers are beginning to strike across its states. Federal, state, and municipal debt are at a higher level than when they were singing "Don't Sit Under the Apple Tree (With Anyone Else But Me) at the end of 1945.
NATO is going to invade Libya unless someone kills its punching bag clown over the next few days. Once again, that sounds expensive. So here's a rhetorical question, and a serious one, meaning I don't know the answer: what do you think it would take for the US to give up control over Saudi Arabia's oil?
Posted by MarcLord at 3:59 PM

I don't know what it would take either. I have zero control over it, so I refuse to worry about it. Yeah, that's my way of saying "where's that People from 1993??"

What worries me is how exquisitely incompetent this government remains in its foreign policy. I had expected a decent level of improvement under Obama, but there isn't much.

Also, Bee, I don't think reforms in the Mid-East or elsewhere are bad. They're potentially very positive, and may force our government to finally make fundamental policy changes, as all-out collapse would require. It's just that the transition period will be so dangerous.