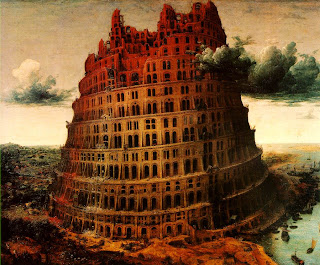 Perspectivating
While he was at Yale, George W. Bush was chosen to be a member of the secretive Skull & Bones society. His father, George H.W. Bush was also a member, and his grandfather had co-founded it. Skull & Bones are assigned nicknames when initiated. George Bush the Elder's nickname was "Magog." Via Alternet:

In 2003 while lobbying leaders to put together the Coalition of the Willing, President Bush spoke to France's President Jacques Chirac. Bush wove a story about how the Biblical creatures Gog and Magog were at work in the Middle East and how they must be defeated.

In Genesis and Ezekiel Gog and Magog are forces of the Apocalypse who are prophesied to come out of the north and destroy Israel unless stopped. The Book of Revelation took up the Old Testament prophesy:

"And when the thousand years are expired, Satan shall be loosed out of his prison, And shall go out to deceive the nations which are in the four quarters of the earth, Gog and Magog, to gather them together to battle and fire came down from God out of heaven, and devoured them."

Bush believed the time had now come for that battle, telling Chirac:

"This confrontation is willed by God, who wants to use this conflict to erase his people's enemies before a New Age begins".

The story of the conversation emerged only because the Elyse Palace, baffled by Bush's words, sought advice from Thomas Romer, a professor of theology at the University of Lausanne. Four years later, Romer gave an account in the September 2007 issue of the university's review, Allez savoir. The article apparently went unnoticed, although it was referred to in a French newspaper.

The story has now been confirmed by Chirac himself in a new book, published in France in March, by journalist Jean Claude Maurice. Chirac is said to have been stupefied and disturbed by Bush's invocation of Biblical prophesy to justify the war in Iraq and "wondered how someone could be so superficial and fanatical in their beliefs."

(Note: graphic above is of Breugel the Elder's painting "Little Babel.")
Posted by MarcLord at 4:48 PM

So, this was available to the MSM in time for the 2004 election. First I've heard of it. It's difficult, in hindsight, to understand how this nitwit garnered such unanimous deference.

There was talk for some time about Bush being one of those apocalyptic nutters. It's nice to be somewhat vindicated, but really, really sucks that it never even got mentioned here. Of course, restaurants at the time were still serving those stupid "Freedom Fries," so I'm not terribly suprised.

The thing most armchair theologians fail to grasp is: Israel's help will cometh from the Lord (study Ezekiel and Revelation). Nowhere is it ever stated, or inferred, that another country or group of people (Christians) would, or should, come to their aid.

Remarkable. More voo doo and hocus pocus put us in Iraq than the lies from Dick Cheney. What a country, eh?