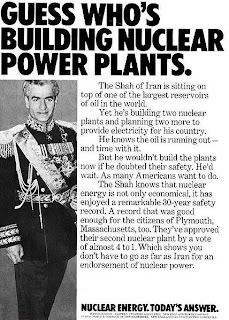 It's All Fun & Games Until The Corpses Start Rotting, Pt. I
Scene: Early 2002,the Pentagon. Officers and bureaucrats are seated in bad chairs around an intelligence briefing discussing "Weapons of Mass Destruction" in Iraq. A Defense Intelligence Agency officer speaks:

"With all due respect, sir, our contacts in the Iraqi Army have reported Saddam ordered the destruction of all his WMD. They say he's been clean since 1998 and he's sending people around again to make sure it's all gone. Significant risk exists that we won't find anything."

Donald Rumsfeld frowns, turns to glare at the officer, raises his chin, and begins to speak:

"Clean? Clean?? To hell with your contacts. Your naivete is astounding. I personally gave Saddam nerve gas in 1987 so he could use it on the Iranians when they were kicking his ass. I gave him anthrax and then we taught him how to weaponize his own. I gave him enough VX to make cockroaches go extinct. I know what WMDs he has and how much so you had best get with The Program, which is about where."

That's pretty much how it played out. Rumsfeld gave the WMDs to Saddam at the behest of the Reagan Administration so Iraq wouldn't lose its war with Iran, a war which the State Department encouraged and green-lighted. So the assumption was understandable. The part about little balsa-wood rockets flying from Baghdad to gas Washington D.C.? They knew that and a lot of other stuff was BS. But they really did think Iraq had nerve gas.

1) The CIA knows the Taliban is evil. Because they created it.
2) The Army knows the Taliban insurgency is well-armed. Because they're arming it.
3) The US government knows Iran will be a nuclear power. Because it provided the assistance to become one under a program called "Atoms for Peace."
4) Israel knows Iran will nuke it. Because its guilt complex is the size of apartheid South Africa.

The last two points, in which irony and hysteria perform a square dance, are worth watching.

Irony leads. The Ford Administration signed a directive in 1976 offering Iran a complete nuclear fuel cycle, in which the Iranian government would purchase and operate a U.S.-built plutonium extraction facility. Who ran the Ford Administration? Richard Cheney was the White House Chief of Staff; Donald Rumsfeld was the Secretary of Defense. Their rationale was driven by oil deals: according to their strategy paper, "introduction of nuclear power will both provide for the growing needs of Iran's economy and free remaining oil reserves for export or conversion to petrochemicals."

Henry Kissinger, who had to turn up in this story somewhere, was Gerald Ford's first Secretary of State. He had been isolated by Cheney and Rumsfeld, who both despised him, and he recalled in 2005, "I don't think the issue of proliferation came up." In other words, the Two Duh-migos sold off billions of nuclear goodies while muffling any objections. A 1974 CIA assessment reads, "If [the Shah] is alive in the mid-1980s ... and if other countries [in the region] have proceeded with weapons development we have no doubt Iran will follow suit."

So the bellicose curmudgeons emeritus most agitated about a nuclearized Iran are the ones who wanted it that way in the first place. You'd think it would be fun for a few journos to raise the point, as in, "Boy, you sure stepped in that one dinchya?" Too much to ask for, I know. Will move onto Israel's hysteria in the next post, because this week Israel's Threat-o-meter moved past the "Burning My Hand On The Stove" level to the near-maximum "Toxic Shock Syndrome."

We have had some truly sicko people run the US Government in my lifetime.

Chicken: Too shallow to print, too low to take action, too dense to appreciate History, too willing to accept pain until far too late...stand in the street until far, far, too late....

p.s. Don't shut my mouth, I have been entirely too polite for a lifetime! I have had the privildege (?) of seeing many years with diluted knowledge, scrap the textbooks and start anew....Someone fed me the wrong attitudes, papers, agendas,love,
knowledge until I have finally realized the complexity of inheriting all of this MESS! wE CAN SO EASILY FIGURE OUT WHAT WAS WRONG, so poorly figure out where to go! We do not groom leaders anymore, the curse of an affluent society...only those who can be bought! Endurance only comes from those who can stand until the very end. What the hell was Star Wars all about??

I am FURIOUS, ABOUT ALL OF THIS!!!
Hitler began this, not knowing all about what it was! Exclusion of dialogue, provoke unknown thought, shut out questioning? Squell brain origiality? Carve out he very HEART??? And serve it where????

And the End of Time will never be Good Enogh...At the End of Whatever Day, let us not GAG at what is left...

This so difficult???? To exclude the diagloge of everyone is s--o=o, exclusive, What the Hell was that??? A Settled Life, Wished
For....No Pain, No Disease, a Promise???

you must be kidding me? Do we want pAIN NOW OR LATER??? Black soldiers on Iwogima knew, the horrow of the lost stories,captured like a butterflies' net?? It was a Poetry Never Captured in a Momemt in Time....

Some Mother's Heart sent every one of us where we are? It may have been both both a Blessing and Curse to know: She had poetry in her SOUL!!! yOU BETTER BELIVE IT bABY!! sORRY, cAPS ARE WRONG....