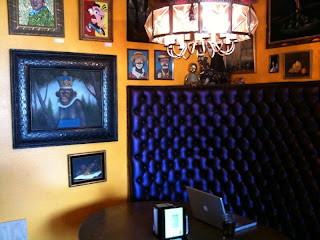 Blogging From The Obama Room
No, really. I am. It's located in a cafe that houses the Museum of Bad Art. The picture of the topless chimp masterwork above was taken with my replacement 3G-S iPhone, long live the iPhone, while getting jiggy with all its new features and toys. The old first-gen iPhone slowly expired as its touch-screen lost sensitivity, then all usability, like some poor Alzheimer's victim which would have to be painfully re-booted on every drama-filled visit: "You're here to kill me, aren't you? Agghhh!"

It's probably not above 100 degrees in the Obama Room, a torporous 91 outside. I can continue to blame a terrible bout of blogger-block on the weather, or come clean. Truth is I've been 'whelmed by the momentum of Big Events swirling in the flushes of a ridiculously petty News Cycle. Scores of posts have passed through my head, of course, but few even reached draft stage. I've been almost silent on the tumult in Iran that's playing out, on Health Care Reform (a.k.a. "Obama's Stalingrad"), and on moon-walking to the car in Michael Jackson's memory. It all seems transitory, minor when compared to The Anomaly reaching for us. If you say the sky is falling, best to explain how and why. Tricky, that.

I've dined with heads of state and have cleaned up the vomit of the developmentally disabled. I've worked for and passed through the doors of many edifices, majestic and humble, and all I've ever found anywhere is human nature. Forces ignored at peril. Maybe the pull I've been feeling is a vast, inexorable vacuum of denial between reality's arc and its PR firms and stockbrockers.

Put in Star Trek terms, Captain Obama is asking too much of Scotty's thrusters, Mr. Sulu doesn't have a frigging clue and something is about to bust. I will try to form my dread in more direct terms. Admittedly, I'm looking at a perfect reproduction of Van Gogh's "Starry Night," made out of yarn, so enjoy your day to the full. 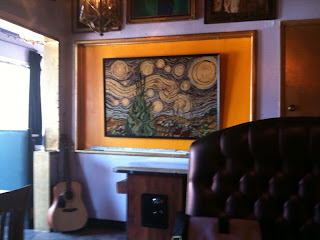 Good to see you back, Marc - missed ya, buddy:)

dunno about that, but I'll take the compliment. Thanks!

thank you as well, and yes I'm sorta back. Still just a blind man feeling the parts of the elephant.

Why do I get the feeling that more than just shuttling the kids around has been going on?

I'm being nosy, aren't I. Bad habit, but one I find dreadfully difficult to break.

i need help!
Human rights are being abused in Iran. Iran is on the brink of fascism; and the only think Ahmadinejad responds to is WSTERN PUBLIC OPINION (and not military or economic pressure!)

how can I help? Is there someplace where I can post stuff where it would get back to his administration?

Marc, you know if you ever wanna talk, I'm only an email away.

I give...what cafe is that?