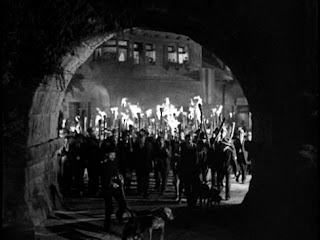 Pitchforks and Torches
Posted by MarcLord at 11:53 AM

I'm angry too. Have been since I was twelve years old and it became apparent what Reaganomics would do to the country. Nearly all of the economic problems we face now are extensions of decades of the republican party holding steadfastly to the holy grail of trickle down until it went from being a failed economic theory to an outright personal ideology written in the stones of divine prophecy of how to fill the rich belly while letting the other 95% keep on picking up the tab until there's precious little lifeblood left to suck from that turnip. So yeah, we're mad as hell. The middle class is sinking in the quicksand while the republican hierarchy just scratches its head and whines "why o why o why don't they trust us anymore?"

When are these criminals going to be arrested, and I'm not talking throwing us a bone like Bernie Madoff? The problem is that the corruption is so widespread and pervasive that if a few go down, they all go down. They're all linked together in a daisy chain of corruption. But that's exactly what needs to happen. And until that happens, none of this is going away. It will only get worse.

Yes, Obama's numbers are high, based on his rhetoric. However, up to this point that's all it's been -- rhetoric. If he continues to refuse to 'look backward' and hold those responsible to account, he may have a date with the tar kettle himself.

I wanna see some justice. I want action. And I'm sick and tired of hearing that worn-out line, 'He's better than Bush'. Hell, the fry cook at your local Burger King would be better than Bush.

I had a seat at the banquets of power and offers to work for them, but it was obvious they were probably crazy and definitely murderous.

Their vision of the world is dark indeed because even if we're all just dogs in a pit, the winner still loses.

you were at the elite table, too, so you know that they're trying to save the system by taking it further. It's Hahvad Yale Princeton and Manhattan trying to save themselves and telling each other, "We'll st together."

Pitchforks are in the news today. Obama told the Bank CEOs that his administration was the only thing between them and the pitchforks.

There is a reason Obama is giving cheap presents to the kings and queens of the world.

You won't hear that "better than Bush" phrase out of me. Obama is very much part of the problem and he's trying to use old bottles and ignoring the new wine in front of his face.

In my opinion, it would be far more effective to hawk investing in a New America. Investment in the things we need to get off oil, i.e., off the militarized paranoia mission we're on to drain the world of it. Obama would be a superb pitch-man for that message. Whereas he's completely out of his element when it comes to economics.

Had the trillions we've spent (and continue to spend) on the wars in Iraq and Afghanistan been used for alternative energy research, we'd be energy independent today. Big Oil can't stand the thought. I believe that I'm about the only person that has noticed that when all the alternative energy talk started reaching fever-pitch, the price of oil took a nose-dive. Now the talk has cooled somewhat. Coincidence? I don't think so.

Not only is Obama 'out of his element' in economics, his picks to solve the problem (Geithner and Summers) will only exacerbate it. THESE are among the ones who got us where we're at today.

He's wrong when he thinks we need people who 'know the game'. If they know the game, they will play it for all it's worth. We need honest people to clear the gameboard and start over fresh.

somebody once said on a blog somewhere that Obama would be the American Blair, and that, my friends, is proving prophetic, which makes Obama worse than Bush.

Obama's motives are clean, he plays a deep game and has inhaled the Masters. So I'm not giving up on him yet. Until someone enunciates a new system, and they're still on the margins, we have to try and save this one. We can let it spend all its energy, let it burn itself out. In warfare this is called frictional loss and despite maximal effort its offense is grinding to an overextended halt.

I hoped for more boldness, but this is the proven way to do it.

he may be and may very well end up holding the bag. but Blair didn't knowingly step in to clean up a train wreck, and O knew that much.