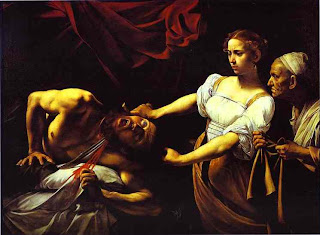 Caravaggio Cheated!
And it's comforting, in a way, because elephants and cats paint better than me. Via the Guardian:

Revered as the baroque master of lifelike portraits and light and shadow, the 16th-century painter Caravaggio is now being touted as the first master of photographic technique, two centuries before the formal invention of the camera.

The Italian artist has long been suspected of turning his studio into a giant camera obscura, punching a hole in the ceiling to help project images on to his canvas. But new research claims that Caravaggio also used chemicals to turn his canvases into primitive photographic film, "burning" images he then sketched on to for works such as St Matthew and the Angel.

"We were already sure Caravaggio projected images of his sitters, but we have now found mercury salt in his canvases, which is light-sensitive and used in film," said Roberta Lapucci, conservation chief at Florence's SACI institute.

Lapucci said she investigated the use of chemicals after building a camera obscura with artist David Hockney. The technique of using lens and mirrors to project an image was written about by Leonardo da Vinci, and Caravaggio was reputedly inspired to use one by the philosopher Giovanni Battista della Porta.

"You get the image by turning the whole studio into the camera obscura, but you need darkness, and the problem is you cannot paint in darkness," she said. "X-ray fluorescence shows the presence of the mercury salt in his canvases. That is not uncommon because it was used in glue, but we are awaiting proof he was using it on the surface, in his primer."

The image burned into the primer would last about 30 minutes and only be visible in the gloom. "Therefore he used a white lead paint to sketch, mixed with barium sulphate which was luminous, and which we have found traces of. That way he could see where he was sketching."

The image above is Judith Beheading Holofernes, a depiction of yet another comforting Bible story, this one from the Book of Judith. Holofernes was Nebuchadnezzar's general besieging a Hebrew city. Judith was a beautiful widow in the city who seduced him, got him drunk, and cut off his head with his own sword. She carried his head along the ramparts to avert the city's imminent surrendur, simultaneously lifting Nebuchadnezzar's siege. Perhaps some good woman in Washington, D.C. will be inspired to do likewise with Treasury Secretary Timothy Geithner.

The excellent Bee Keeper's Apprentice uses Christofano Allori's 1613 version of the event as her blog graphic, and by coincidence the same massive, ornately framed, seven-foot by nine-foot painting would greet visitors to the living room in my stepfather's house, as follows: 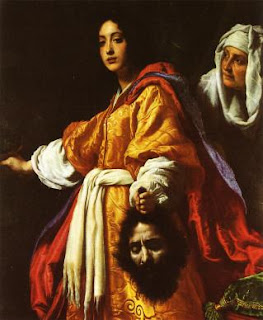 Caravaggio's Kiss of Judas is amazing. It's in Dublin.

Ahh, Judith, mine own Alter-Ego...
How nice surprise to stop by and discover some linky-love :)

I don't know about a woman in DC teaching Geithner a lesson, but this woman in Richmond is making preparations to go give him a back-bone transplant.

Now, I wonder where I left that spare spinal column...

Hi Pez and Bee, how nice to have you two damn-strong women on the same comment thread.

Thanks for the Judas Kiss Pez and Bee it is with some relief that my spinal column is too far out of reach. ;-)

"Perhaps some good woman in Washington, D.C. will be inspired to do likewise with Treasury Secretary Timothy Geithner."

Dana Perino comes immediately to mind, in order to clear her name, and exchange Republican bodily fluids at the same time.

yesss, phil, Perino's potential has been duly noted for some time

In the interests of science, and of moderating cheap publicity stunts, surely the least Roberta Lapucci can do is demonstrate the techniques allegedly used by Caravaggio in fully-fledged reconstruction, using materials and tools available in his time.

I'm sorry to be rude, but Dana Perino is lying tart. Don't bother waiting for her to do anything useful.

rude would be to say that all she has to do is lie there.