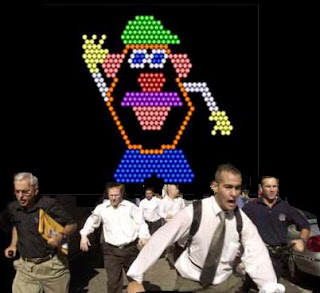 All Your Base Are Belong To Us
Game over. Today's Financial Times:

"China's central bank on Monday proposed replacing the US dollar as the international reserve currency with a new global system controlled by the International Monetary Fund."

The Nasdaq and Dow went up by 7% today, despite China making this official statement. Because David Axelrod (Obama's Karl Rove) lost a battle over the bank plan to Tim Geithner, who just told his friends that Cash for Trash was in, there will be no repercussions and no limits on executive compensation. I can honestly tell you that people are partying on Church Street tonight buying some 50 dollar teenies and inhaling some 80s snuff.

There's a Chinese saying: to enslave someone, indebt them. The Fed is going to have to keep buying it's own Treasury Bonds, sure, I know the Fed isn't part of the govmint, right, and that's not change we can believe in. If you are fortunate enough to have some money in a bank, get it out. Tomorrow. Buy power tools, generators, a few thousand pills of Xanax, and enough booze to keep a bar open for a few months. Hell, buy a still. You can sell it all later on Craig's List after the dollar has inflated by 1,000% because while the bankers party they're too stupid to have known what the message said:

Translation from the Chinese: "If you inflate your bonds, and you are, there is no longer any reason for us to hold them. Since the Fed is buying its own bonds maybe it won't mind buying ours back, too."

Translation from the Japanese Sega Game: "With the help of Federation Government forces, CATS has taken all of your bases. Your ship is about to meet its doom also."
Posted by MarcLord at 5:11 PM

do people hate how right you are all the time? they probably dis(miss) you as arrogant and/or a little crazy/conspiratorial. when I get a new life, I wanna be less smart and have great teeth...

At least it's making someone nervous. Bernanke seems to be fine with it.

I believe I'll start hoarding food, maybe buy a gun. Not sure where I'm going to grow my vegetables... outside Red West A? Thanks for your continuing vigilance, Marc.

oh you're there again. food's always good. Is Ballmer still shooting the 'roids?

It's all over but the crying. *sniff, sniff*

Bro Tim--bright side: I have been wrong and lots of people will tell you the Chinese have no choice but to hold on to their bonds. I don't agree and find that statement irrational, but they might be right.

SLL--funny, I don't remember that one. Which movie?

Got it: Speed the Plow. Never saw it.

I believe the correct spelling and pronounciation of the redneck govmint is "Gubmint". It even sounds better phonetically. Just sayin.

Do they have rednecks in the extreme Northwest?