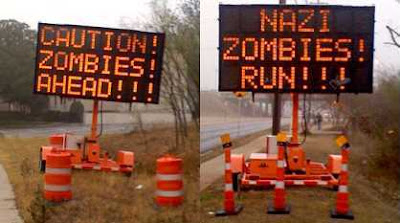 Attack Of The MBA Zombies
The good news is I didn't write this. The bad news is I may as well have. Like its author the prophet of a new religion called Furtherism I ran away screaming from the inside refused to take my MBA and hang it on a wall like a death certificate. Sure it was hard but it's all about staying alive.

Warning: If you are ever attacked by a zombie, you will become one. That is what they say. If you or anyone you know has a mortgage, a credit card, or has attended one of three business schools, you had better move to Cuba. It is one of the few places outside of rural Alaska where you can avoid the dreaded MBA Zombie.

Crack researcher (and Zombie fighter) Deborah Barrow has just released her top-secret study of where the Generation Z (that is Generation Zombie) became that way. While not reminiscing about the good old days where kids could run free after school and climb trees with abandon, she does identify where the Zombies go through their initiation rituals and final transformation.

And the biggest Zombie Mill that spawned our current threat? Harvard, or as said by the Zombies themselves, Haaavaad. Don't say it out loud - there may be evidence that if chanted, zombies will appear.

The next on the list: NYU Stern School of Business. Stern is the German word for star, so this must be where they get their training in astrology, figuring out the exact moment to strike. I never knew how they could act in unison. I always thought it was a keen sense of smell, but this changes everything.

And the third? Cornell? That school that wants to be in the Ivy League, but can't decide if it is a state school for the unwashed masses or an elite up-yours-I'm-privileged private school. Somehow that makes sense. Only Zombies would want to have a dairy and farm lab nearby for their ghoulish experiments. Frankenstein is making way too much sense right now.

Now we know what happened to the banks. Be very careful out there. And destroy your credit cards and mortgages, if you have any. It is very important to stay alive. Plant a garden.

I gotta laugh. That sign in the picture was here in the St Louis area about two months ago. MoDOT, the Missouri Dept of Transportation has since put locks on the keyboards. Their excuse for not having locks, was that the road workers often change the sign several times a day. Funny how the actions of one person can change government policy.

You have no idea how glad I am that I got a degree in something marginally useless - history, rather than something absolutely useless- business.

A lawyer I worked with once asked me why I didn't just go to law school, instead of schmucking around as a paralegal - I said "because I don't want to be like you."

And I didn't even get fired.

ROTFLZ. I love you guys.

I couldn't help but swipe this one for a friend who got his MBA from Haarvaad, spoken like a true Kennedy, and hopefully he'll take it kindly. It's very good! Hey sorry you got your MBA but what the heck. I'm job hunting and for janitorial apps you need one today.

Some people may think I was kidding when I said awhile back that MBAs should be transported directly from their graduation ceremonies to the nearest prison, in a pre-emptive strike against the crime waves these sociopaths will launch if allowed to go free.