Coldplay's 'Viva la Vida' & Lyrics
Myth prefigures art, art prefigures physics, and physics prefigure the unthinking efficiencies of resulting orthodoxies. I've heard this song quite a few times this summer, not least because it has climbed to #1 on the charts. Like all their other work, Coldplay's trademark poppy-flows lull you into swaying trances, and as the overwhelmed words wash over you, the song becomes something like a holograph. Beautiful, rotating, floating just beyond your grasp, you never quite get at what they're about by just listening.

The band's music in general and this song in particular are vessels, it seems, for world music and for an entirely different commercial model, bearing other artists and styles away from nearly a century of American dominance, ostensibly from what has become a usurious, hyper-vigilant Industry, a rusting monolith thoroughly ill-suited to digital distribution. The album 'Viva la Vida, or Death and All His Friends' is themed around guerillas and insurgencies, around love in all its diversely and promiscuously international forms, around the global cycles of war and peace. Song and album were both produced by Brian Eno and released exclusively on iTunes on May 5th, with Europe having to wait quite a while for production of a physical CD. By the 30th of June, the album had sold more digital downloads than any in history.

The clearly audible first line, "I used to rule the world," is a tip-off to greater depths and possible endurance, as is its title from the Frida Kahlo painting of watermelons; the album's cover art is from the 1830 painting by Eugene Delacroix, Liberty Leading the People. I dawdled a while before searching out the lyrics, but sure enough, frontman Chris Martin, better known in the US as Gwyneth Paltrow's husband (for whom he wrote the intimately disclosing song 'Yellow'), penned a title-track meditation on imperial strivings and deceits: "Revolutionaries wait...for my head on a silver plate. Just a puppet on a lonely string...oh who would ever want to be king?"

Martin thinks Saint Peter will never call his name. Not sure about that, but funny enough, the song and album's release are an artist's crowning achievements, ones which surely demanded an intense devotion to craft, which surely plant new guidons for others to follow. The viddy is of them playing to an adoring, seemingly thrown-together crowd at the BBC Centre. Here are the lyrics:

I used to roll the dice
Feel the fear in my enemies eyes
Listen as the crowd would sing:
"Now the old king is dead! Long live the king!"

I hear Jerusalem bells are ringing
Roman Cavalry choirs are singing
Be my mirror my sword and shield
My missionaries in a foreign field
For some reason I can not explain
Once you knew there was never, never an honest word
And that was when I ruled the world


It was the wicked and wild wind
Blew down the doors to let me in.
Shattered windows and the sound of drums
People could not believe what I'd become
Revolutionaries wait
For my head on a silver plate
Just a puppet on a lonely string
Oh who would ever want to be king? 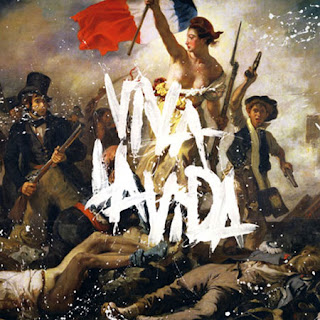 Yellow was released in 2000 and written well before that year. Martin didn't meet Palthrow until 2002 - wasn't written for her at all.

Ha! Thanks for correction. I thought that because it was reported that he dedicated the song to her in a concert she attended. No harm in re-using material, I guess.

I guess he just likes blondes.